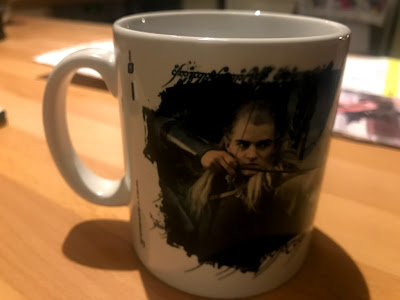 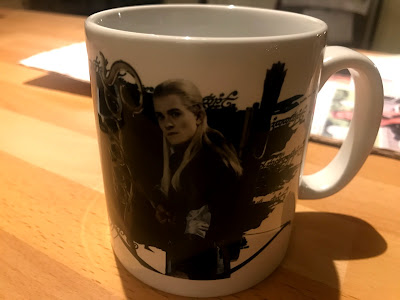 My husband sure knows what I want for Christmas... an elf. :D

Cat of the Fellowship - another Legolas story

Now that Afterlife is completed, I felt an urge to write another humorous fic, and came up with an idea to write a story that follows the main arch of the Lord of the Rings trilogy - from the perspective of a cat! 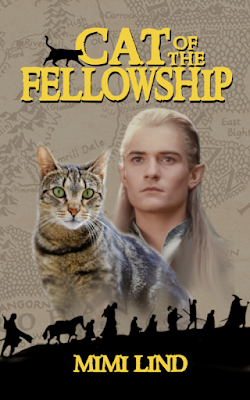 Gosh, were they tall!
Of course, that was when she realized they were not big,
it was she who was small. “Miaow!” she cried in dismay.
Description:
Sent to join the Fellowship of the Ring with a mission of her own, Kat certainly did not expect to be reborn as a cat! Saving someone's life in a feline form proves no easy task, especially when only the elf can understand her. That he is also a very good-looking specimen is not useful at all...
Pairings: Legolas x Kat (slowburn)
Follows book canon.
Read it here:
*Wattpad: https://www.wattpad.com/991355215
With chapter pictures, and easy to read via browser or an app. Need an account on the site (which is free).
*Quotev: https://www.quotev.com/story/13318304
With chapter pictures, no account required.
*Fanfiction.net: https://www.fanfiction.net/s/13762710
Simple text layout, no account required.
*Archive of Our Own: https://archiveofourown.org/works/27917806
Simple text layout, no account required.
Etiketter: Cat of the Fellowship, Stories 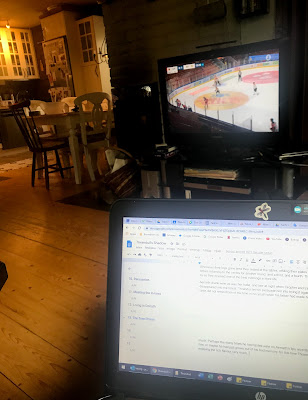 Rainy October Saturday somewhere in southwestern Sweden. Hubby watches hockey, kids are in their rooms (using phones and/or computers probably) and I'm writing a new chapter for my Thranduil story, right now with Dynamite by Taio Cruz in my ears. Can't complain!

Pigs, Pirates and Rum - Crossover Titanic/Pirates of the Caribbean

So, I just made another little fanfic, mostly for fun... Rose DeWitt Bukater drowns and finds herself in the 18th century Caribbean, on board the Flying Dutchman. Will Turner decides to take her to the one and only, Captain Jack Sparrow. 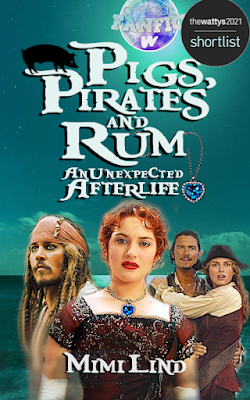 “The Heart of the Ocean!” he whispered.
“No wonder the Dutchman came for her!”
Pigs, Pirates and Rum - an Unexpected Afterlife
Rose has an unexpected Caribbean adventure with a diamond heart, a pig, too much rum and a pirate named Jack Sparrow. Saving her new friends Elizabeth and Will Turner proves to be dangerous, but falling for a dishonest pirate on rum withdrawal is even worse.
A humorous feel-good story, and a crossover between the Pirates of the Caribbean and Titanic.
It's not necessary to have seen either movie to understand it.
Pairings:
Rose DeWitt Bukater x Jack Sparrow
Will Turner x Elizabeth Swann
Read it here:
*Wattpad: https://www.wattpad.com/943649787
With chapter pictures, and easy to read via browser or an app. Need an account on the site (which is free).
*Quotev: https://www.quotev.com/story/13053496
With chapter pictures, no account required.
*Fanfiction.net: https://www.fanfiction.net/s/13681568
Simple text layout, no account required.
*Archive of Our Own: https://archiveofourown.org/works/26125996
Simple text layout, no account required.
Etiketter: Afterlife, Stories 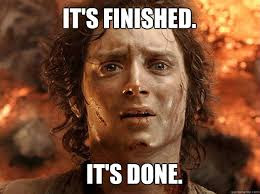 I finally finished my first fanfic, Horse Lady of Rohan! 110 000 words written in less than 5 months. Thank you, quarantine...Writing fanfiction has been so fun, and this was definitely not my last story. Will continue my Thranduil story now!
Etiketter: Horse Lady of Rohan, Stories

My daughter drew these really cool fake tattoos for me, for a party tomorrow. The dragon Smaug. 😃

She has used normal felt tip pens, and drawn freehand from a pic in her phone! 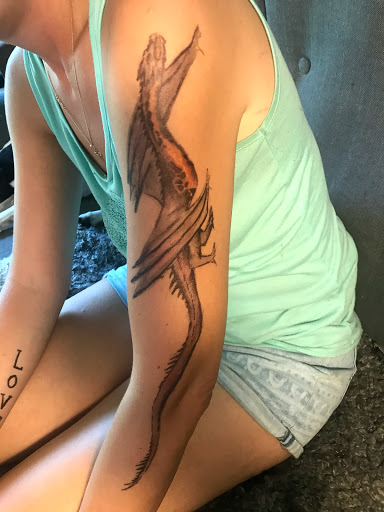 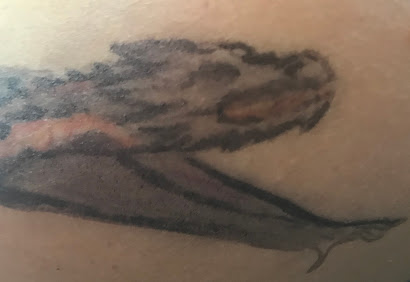 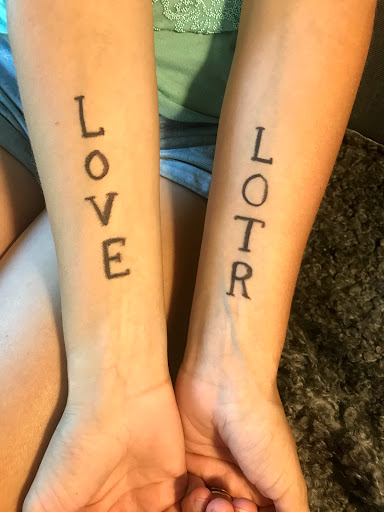 It's incredible that this man spent his entire adult life creating Middle-earth, complete with races, nationalities, languages, history, geography, culture, religion and lore.
When he wrote the Hobbit and later the Lord of the Rings Trilogy, it was almost as an afterthought, and his real work, that his son later summarized in the Silmarillion, was not published during his lifetime.
On his grave, it says:
†
EDITH MARY TOLKIEN
LUTHIEN
1889 - 1971
JOHN RONALD
REUEL TOLKIEN
BEREN
1892 - 1973 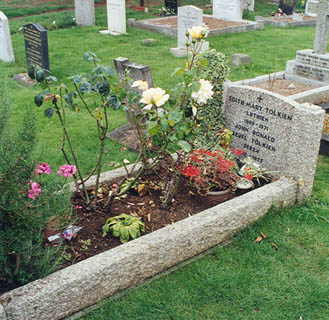 Lúthien Tinúviel, one the most amazing and important of the Middle-earth heroes, was inspired by his wife, and even mentioned on her grave. I don't think it can be much more romantic, than that...
Rest in peace, Professor Tolkien.
Image Source: Public domain (Wikimedia Commons)
Etiketter: Other 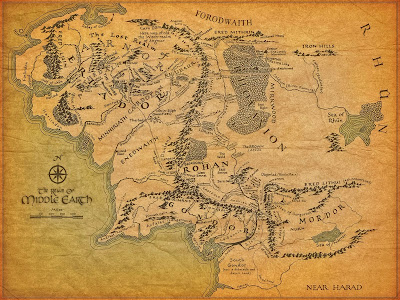 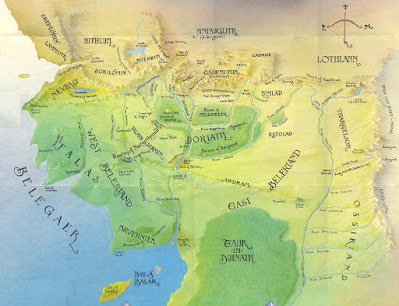 My daughter drew this beautiful picture of Legolas and Wynne kissing. ❤️❤️❤️ 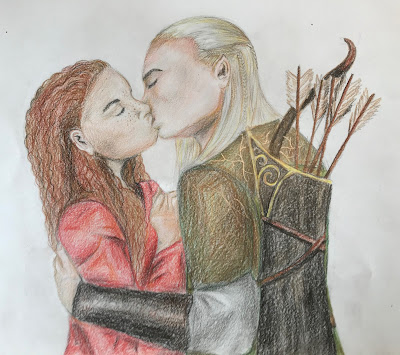 In this story I attempt to explain how the Elvenking became so cold and angry, and why he seems to completely lack social skills.
I plan to follow Thranduil from his youth until his son Legolas is born, and since he was born in the First Age there will be many thousands of years to cover... Some time jumps will happen. :) 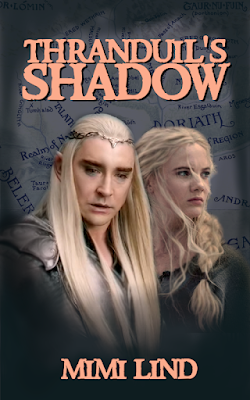 “You make it sound so easy.” He sighed.
“It is easy. We undress. We pray to Eru. We do it.”
Thranduil's Shadow
Young and naive, Thranduil meets his future wife, Legolas’ mother. Follow his complicated relationship through the ages, shadowed by an abusive father and a troubled world, and experience the long lost Beleriand through his eyes.
We know him as the Elvenking, cold and guarded - this is the story of how he became that elf.
The story is set Pre-Lord of the Rings and The Hobbit (1st Age to 3rd Age).
Pairings: Thranduil x Aerneth
Read it here:
*Wattpad: https://www.wattpad.com/story/232168734
With chapter pictures, and easy to read via browser or an app. Need an account on the site (which is free).
*Fanfiction.net: https://www.fanfiction.net/s/13639789
Simple text layout, no account required.
*Archive of Our Own: https://archiveofourown.org/works/25184929
Simple text layout, no account required.
Etiketter: Stories, Thranduil's Shadow

My first fanfiction, where I look into what happens with some of the members of the Fellowship after the war.
There are still orcs and other monsters around, so Legolas and his father Thranduil sets out on a quest to clear the Brown Lands and Emyl Muin. On the journey they get company by Wynne, a young horse breeder from Rohan with a hidden agenda. 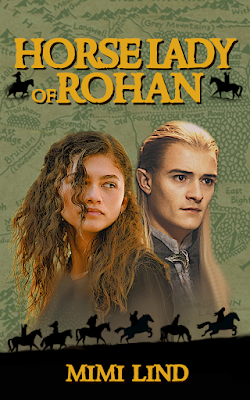 "I've realized we need elven blood at this stage.
Your children will not be plain."
Description:
Wynne must marry an elf, and is sent on a journey with Elvenking Thranduil and Prince Legolas to make that happen. It will be her and five elves all summer, what could go wrong?
– A story with an odd cocktail of ingredients: sweet first love, baby orcs, and the complications of human-elf relationships. Hop on your horse and join the adventure!
Post-Lord of the Rings (4th Age). *COMPLETE!*
Read it here:
*Wattpad: https://www.wattpad.com/865654967
With chapter pictures, and easy to read via browser or an app. Need an account on the site (which is free).
*Quotev: https://www.quotev.com/story/13025052
With chapter pictures, no account required.
*Fanfiction.net:  https://www.fanfiction.net/s/13528657
Simple text layout, no account required.
*Archive of Our Own: https://archiveofourown.org/works/23854051
Simple text layout, no account required.
Etiketter: Horse Lady of Rohan, Stories

These original drawings were the ones I used to make the old cover of Horse Lady of Rohan. I colored them in the computer, and modified them slightly in the finished version. 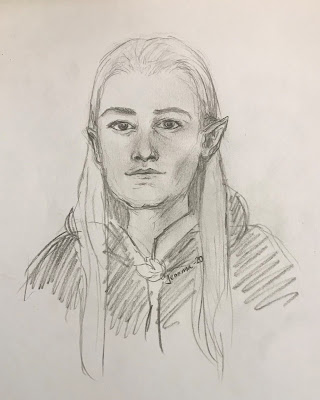 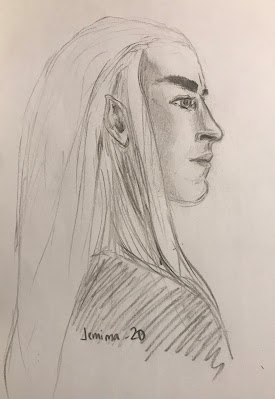 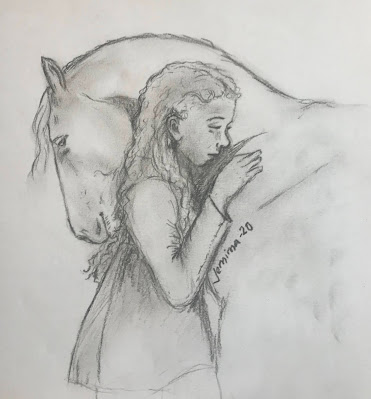 I'm a Sweden based writer, Biology teacher, and book lover. In this blog I will gather anyting related to my fanfiction stories, such as artwork, fanart etc.
More info about me here.
Etiketter: Other
Newer Posts Home
Subscribe to: Posts (Atom)