Today I give you three of my favorite Tolkien couples. :) 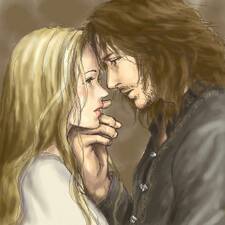 ♡ Valentine N:o 1: Éowyn and Faramir ♡
Image by Ratisbona (I could not find the source).
This is my favorite couple, both because they deserve happiness so badly after all they went through, but also because their relationship was so realistically formed. They met in the Healers' House, both recovering from wounds and regretting being unable to take part in the final battle against Sauron. Instead of falling madly in love at first sight (as everyone else in Tolkien's stories haha), they gradually get to know one another - and then there is love. 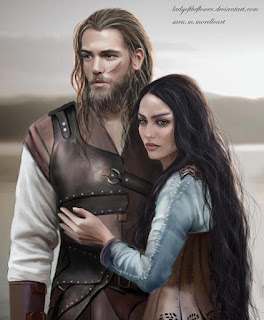 ♡ Valentine N:o 2: Beren and Lúthien ♡
Image by Sara Morello, Sa-Mo Art.
This is my second favorite couple despite all the trouble and grief surrounding their relationship. I love how stubborn Lúthien is when her father is against the match, and how bravely she saves her beloved's life at many occasions. In the end, he waits for her in the Halls of Mandos and they can be reunited and live a few happy years together. 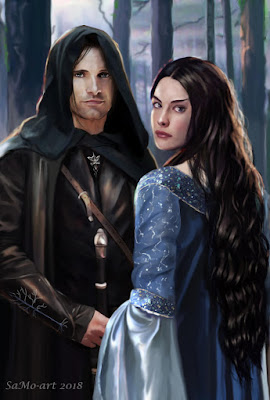 ♡ Valentine N:o 3: Aragorn and Arwen ♡
Image by Sara Morello, Sa-Mo Art.
My third Valentine is another human-elf couple, who had to overcome many obstacles to get each other. Aragorn had to prove himself as a warrior for many years, winning honor among the Rohirrim and the Gondor people, as well as the Dúnedain, and become high king of the humans, before he could at last claim his bride at the mature age of 88 years. And she had to give up her immortality for his sake, and her chance to be reborn in Valinor. Beautiful and sad!
♡♡♡ Happy Valentine's Day! ♡♡♡
Etiketter: Other
Newer Post Older Post Home